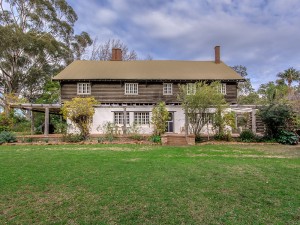 On 15 April 1912 Kingsley and Ruby Fairbridge arrived in Albany, Western Australia, from England and made their way to Pinjarra, arriving on 16 July to establish the world’s first Fairbridge Farm School.

Kingsley Fairbridge’s `Vision Splendid’ (as he referred to it) began forming at  the age of 12 and crystallised in 1903,  at the age of 17, when Kingsley paid a visit to his grandmother in England. During his time there he was distressed by the streets full of poor children, grubby and exhausted from lack of fresh air and food…workhouses filled with children, orphanages bursting at the seams and the overall waste of young lives not able to reach their potential.

Kingsley was impassioned and developed his vision to a point where on 29 October 1909 Fairbridge Farm Schools became a reality. Kingsley wanted to see “little children shedding the bondage of bitter circumstances and stretching their legs and minds amid the thousand interests of the farm” (Autobiography of Kingsley Fairbridge). The aim was to provide children with a sense of self worth and the training and skills necessary for their future in the sparsely populated rural areas of Australia.

From 1913 until 1982, the total number of children assisted by Fairbridge when it operated as a farm school was  3,580. Young people came to Fairbridge under the Child Emigration Scheme, Family and Single Family Migrant Schemes, with Guildford Grammar School when their school was used as a military hospital base during the 2nd World War, Dutch children who had been trapped in the Dutch East during the 2nd World War Indies and as a training depot for the Women’s Land Army during the 2nd World War. These children were provided with a well rounded education as they spent time on each task learning husbandry, metal work, wood work and through  attending classes at the on-site school. Fairbridge was set up on a cottage system with house mothers in each possible. It was said to be a revolutionary process 50 years before its time.